Some time ago a brand new WebFlux by Spring was released introducing the non-blocking reactive programming paradigm. One of the domains to apply this new framework is data streaming, in particular video streaming. In this article I’m going to build a video streaming service and describe the threading model that is being used.

To begin with, let’s investigate how the <video> element works and what requests it sends to a server. For example, w3c has an overview of this html element with the one embedded. The very first request sent to service is as follows:

Generally speaking, it is a simple http GET request. The only additional piece of data that matters is the Range header. It comes from the Range Requests specification and asks the server for a specific part of the file. The header in the previous request means that the client expects data from position 0 in a byte representation of file till the end. A Range header can have a final point, e.g. Range: bytes=50-100.

There are two possible responses to such a kind of request:

Lets have a closer look at them:

Using this simple protocol we can specify any point in a movie to watch. Thanks to getting only chunks of data, users don’t need to wait until an entire video is loaded, which is particularly useful for those with slow connection and per megabyte internet pricing, as well as for creation of a splendid user experience.

The classical MVC was in use for a while and has lots and lots of different features and specification implementations. After version 4.2.4 of Spring, you can download dynamic files from a server with just a few lines of code. The byte-range support is included as well. The following code is based on the mvc branch of my sample project and you can find project dependencies in build.gradle file. Here is the only piece of code you need to implement your video server:

The purpose of the controller send files to client. Let’s explore it line by line:

The only thing left to make it a full-blown video player is a bit of html :)

This section shows how simple it is to make a file server leveraging Spring. While I’m using UrlResource, anybody can implement their own Resource to get data from anywhere, for example, database.

It is helpful to know how the code above works from threading perspective, and what problems we could face because of that. The threading model of MVC is a classical one-per-user thread model. It can be easily observed with Java VisualVM.

Everything works as expected and both loads finish. The threads view shows that for the load period two threads were occupied (green part of line) reading data from resource and writing to output stream (see StreamUtils.copy). It is performed inside Spring’s ResourceHttpMessageConverter for you. 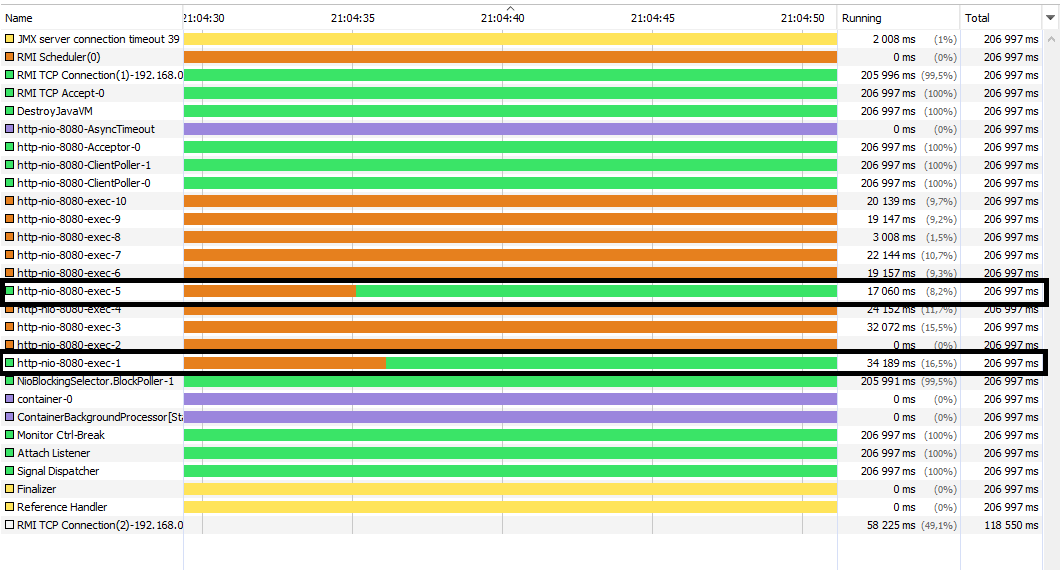 For the video streaming the main shortcoming is: server will not be able to process more users than number of threads it has. This means if there are 10 threads then there will be no more than 10 users. You can easily check this behaviour by setting property server.tomcat.max-threads=1 and calling curl twice. The second request will be processed only after the first one ends. Use a big file for this experiment, several gigabytes, because local download is really fast.

Imagine a situation when your website has exclusive rights for TV series. With an average length of episode of 1 hour, you will be able to pass the content to only 10 customers at the same time. A website with performance like this will never get a wide audience.

Responding with parts of data

One mechanism to address the issue described in the previous section is to respond only with parts of a file. It is suitable only for clients which support byte range responses and html video is one of them. This way, threads will be used for smaller amounts of time giving opportunity to other requests to be processed. Thanks to the ResourceRegion abstraction introduced in Spring version 4.3RC1 developer can now specify the range of bytes to be returned to the client.

There are several additions worth to mention:

Now the server takes much less time to process requests and threads have opportunity to switch to other requests. 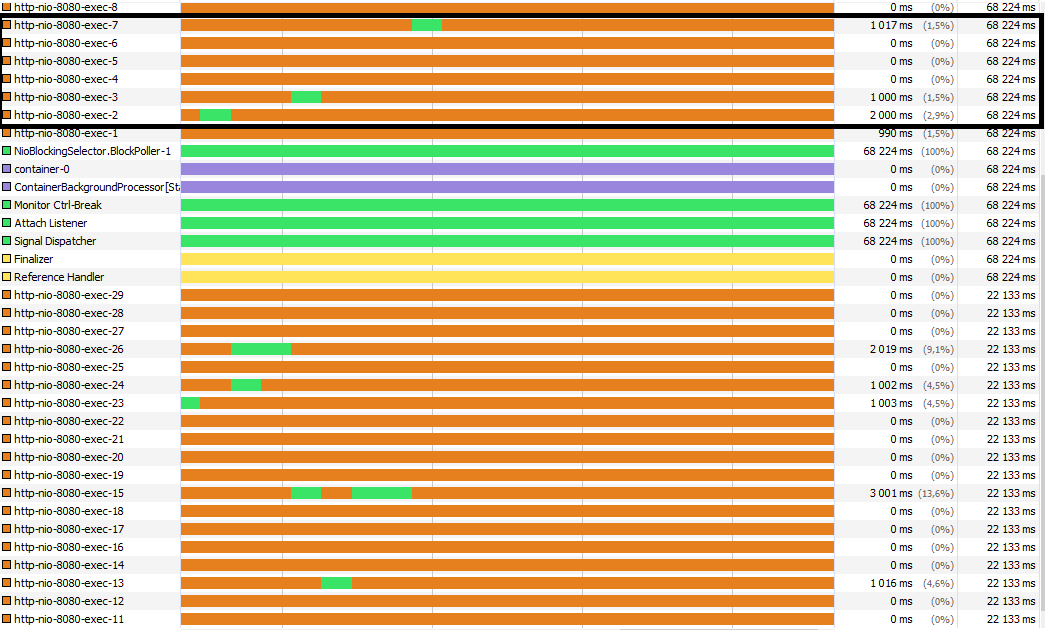 Spring 5 has introduced a new paradigm of the reactive web applications, as well as the implementation of such an api called WebFlux. The main difference is an introduction of reactive streams as a core component.

The response body of resource in MVC was represented as java.io.InputStream. Consequently, to get data from a file and write it to a user connection we need to have a buffer, fill it with data from the file and only then write to the connection.

The main deficiency of this technique is read operations are blocking and hang until the buffer is fully read.

Thanks to creation of NIO in java it is now possible to operate on byte buffers and not streams of bytes. The response body in WebFlux is Publisher<DataBuffer>. DataBuffer is just an abstraction over byte buffer, can be considered as array of bytes. Publisher comes from the reactive streams specification and represents a potentially infinite stream of any entities, byte buffers in our case. The main idea of the Publisher is to work on demand. It does not produce elements eagerly but responds to requests. If the user of this streams requests 3 items then no more than 3 items will be returned. What’s more, there items are returned in an undefined point in future so you don’t need to block and wait them. When the items arrive, a callback provided is executed.

Fortunately, WebFlux api is mostly compatible with MVC and we only need to change underlying implementation to make things work. The webflux branch of my sample repo shows the dependencies needed. The code is left the same as in the MVC section of this article:

Now we’re ready to repeat the experiment with only one thread available. Set the property reactor.ipc.netty.workerCount=1 and call curl twice:

This time both files are loaded at the same time without the need to wait in a queue. I’d like to give you some intuition into how this works internally.

The server has two kinds of work done: selection and actual IO operations. By “selection” I mean the following:

Our video server is mostly interested in write operations. Let’s imagine that write event pops up. Then worker thread takes over:

The pattern described is called Reactor. It allows to handle multiple requests at the same time using less threads by splitting the processing timeline into chunks. While it heavily relies on OS, our program will work only on Linux. The WebFlux server blocks on Windows like the MVC one.

The default implementation used by spring-boot-starter-webflux is Reactor Netty. If no selector threads are configured then workers do both selection and actual work functions. So they read events and handle them right away.

There is one additional bonus which comes with WebFlux: zero-copy data transfer. Byte buffers, copied from file to connection, are not loaded into application memory. All the work is being done on OS level. This feature is available using Reactor Netty (default backend) or Undertow.

In this article I tried to build simple yet efficient video streaming service and give intuition into how things work internally. If you want to read more about WebFlux, reactivity and NIO, here are some useful links: